The Brooklyn Queens Connector, or BQX, has been in the works for a while, and we’ve discussed it, the controversy it’s faced, and its many updates, on We Heart Astoria (…)

The Brooklyn Queens Connector, or BQX, has been in the works for a while, and we’ve discussed it, the controversy it’s faced, and its many updates, on We Heart Astoria before. But now, it seems the streetcar plan, designed to invigorate the eastern waterfronts off Queens and Brooklyn and make it easier to travel between the two boroughs, finally has a timeline. 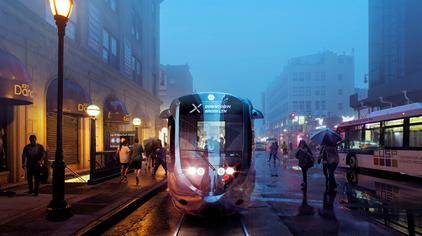 A model of the proposed streetcar. Image via Wikipedia

The BQX was originally proposed in 2011 with support from Friends of the Brooklyn-Queens Connector, but the first proposal was scrapped; the city considered it too expensive and doubted it would see many passengers. After many revisions, Mayor Bill de Blasio finally announced in 2016 that the city would be seeking federal funding to go ahead with the streetcar project.

A prototype of the streetcar. Photo via Facebook / Steve Koepp

But there’s still a lot of planning to do. For example, the exact streets that would be used are still being figured out. But the streetcar line would be beginning in Astoria, at either Hoyt Avenue or 27th Avenue. According to the map on the BQX website (and below), it looks like the streetcar would run along 21st Street or Crescent Street. It would then travel south through Long Island City, into Greenpoint, and end up in Red Hook.

The proposed route of the BQX, which would run from Astoria to Red Hook, as indicated by the black line.

While some people are certainly into this idea, others are concerned that it will be more trouble — and money — than it will be worth. The current 16-mile streetcar project is projected to cost some $2.73 billion to construct, but proponents project it could generate up to $30 billion in revenue. That’s all projection of course, so the reality remains to be seen. Originally, there were going to be an additional 10 miles of track, but the southernmost section was ultimately removed from the official plan.

A proposed BQX station. The BQX is planned to run 24 hours per day, every 5 minutes.

The BQX’s project founders claim that the BQX will shave off about 30 minutes of commute time between Astoria and LIC. It’s also proposed to run 24 hours a day, and would cost the same as any other subway or bus ride. Riders would use their MetroCards to board. Still, people are concerned about how it will affect traffic and neighborhoods, something that they address in their FAQ section.

But don’t plan on moving out just yet: This major project isn’t projected to be completed until 2029, with groundbreaking expected in 2024, and a lot can happen even in five years. The Friends of the BQX say it will “relieve overburdened infrastructure,” and see it as a way to generate growth in the outer boroughs, but detractors worry that it will not get popular enough to justify the cost, may reduce street parking spaces, and say that revamped subway and bus routes may be a smarter option. Others are concerned about what the BQX might mean for neighborhoods, and some wonder if another location would better serve New York residents.

Streetcars were once common in New York. This trolley was photographed in 1928, and the Williamsburg Bridge Trolley Terminal operated from 1908 to 1948.

So what do you think of the BQX? Is it a great new step in modern transportation, or a waste of money that could be used on other projects? Do you think the location and route should be altered? Let us know what you think!

Friends of the Brooklyn-Queens Connector

H/t: This Is Astoria

The NY City Council under Speaker Corey Johnson is looking address the transit system which when first established allowed for the development of the outer boroughs but is no longer meeting the needs in today’s NYC.
Would think this proposal should be formally presented to the Council to see how it may fit in to the newly proposed BAT system to provide viable transportation solutions to all travelers within all boroughs of NY CITY.

I don’t see how it could run down Crescent from up there. It’s only a two lane street. 21st Street is really the only option, and it would make horrible and dangerous traffic even worse there. Not sure why they ever ditched the Triboro RX plan.