If there’s one constant thing about Astoria, it’s that it’s always full of change. There’s been a lot of that lately in the neighborhood (and we’re not just talking about (…)

If there’s one constant thing about Astoria, it’s that it’s always full of change. There’s been a lot of that lately in the neighborhood (and we’re not just talking about whatever real estate fallout may be happening in LIC after Amazon bolted). Here’s a look at all the new changes you can expect to see in the coming months.

QWNS Cafe, right by the Ditmars Boulevard Station, posted this note on its door Monday morning, stating that the cafe, known for its inventive drinks and delightful pastries, would be closed during a “transitional period.” It looks like the plan, for now, is that the cafe will be back and operational in the future, but that’s all we know. Image via Museum of Modern Art

In April, a new restaurant headed by chef Mina Stone, author of Cooking For Artists, and designed by artist Alex Eagleton, will be opening at MoMA PS1 in LIC. The menu is similar to the family-style meals found in her illustrated book, and will feature a seasonally changing menu of Mediterranean-inspired dishes. The restaurant is slated to open in April, and seeks to provide a dining space for museum patrons and the LIC community alike.

Flo Lounge on 30th Avenue is set to become Biskoti Bakery & Cafe. It’s a very large space, so we’ll have to see what the new owners are going to do with it all, and how it will manage all the competition, since bakeries seem to be popping up all over Astoria. But who can say no to classic biscotti and other traditional favorites?

TRU, at the corner of 36th and Ditmars, is developing an all-Greek wine program that is (surprisingly) the first in the neighborhood, with a special focus on organic, natural, and biodynamic wines. Try the wines alongside their meze dishes (think Greek tapas) for some great pairings. 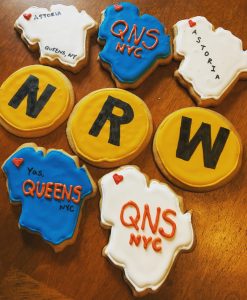 Bench Flour Bakers has been around for a while, with beautiful baked goods offered at pop-up markets and craft fairs all over the neighborhood. But now, they’re hoping to settle down into their very own spot right here in Astoria. We’re not totally sure about the exact details, but based on what we’ve seen on their Instagram, we hope it’s close!

A New Tiny Kitchen Will Be Offering Pop-Up Brunch

Formerly a crepe joint, a tiny kitchen space on 35th Street is being taken over by head chef Eric Bayron and bartender/operator Ravi Thapa, both of whom you might recognize from Mar’s. The new place, Foodstruck, will offer food to-go, pop-up brunches, and catering, featuring New American cuisine with an international spin. It looks like things are still in the works, but keep up with them on Instagram for the latest.

There’s A New Greek Taverna In The Works

A new Greek taverna is slated to open sometime in late April or early May, and comes to us from the creators of AVRA and Anassa Taverna in Manhattan. More casual than its counterparts, it will also have a focus on “botanical” cocktails.

Last month, CimCim opened on Ditmars next to Watawa, and right near Acento. They offer Mediterranean cuisine of the more Turkish (rather than Greek) persuasion, with dishes like falafel, baba ganoush, hummus, and shawarma, as well as vegetarian and vegan options. There will also be outdoor seating come the warmer weather. Fun fact: “cimcim” means “sesame” in Turkish, as sesame is a common ingredient in many dishes.

Do you have any hot new tips about what’s coming to — or going from —  the neighborhood? Let us know what you’ve heard in the comments, and we’ll keep you posted about the new developments on these spaces!